The stories your river guide doesn’t want you to know.

1. There is not a rangefinder for the depth of the river on the end of your guides paddle.
One of the most frequently asked questions on the river is ‘How deep is the river?’. Being the ever charming, and over-creative river guide that he is, your raft guide might choose to forego the so-called ‘truth’ of the answer, and instead decide to pull out his handy dandy depth finder. He may choose to stick the tip of his paddle in the water, place the other end to his ear, tap the paddle, and after a second or two (for dramatic effect of course), exclaim “8 ft.!”. Don’t let this fool you! Your raft guide IS a genius, but they have not found a way to calculate the depth of the river my listening to the vibrations of their paddle. They are simply put- ‘full of it’. Smile, laugh, and give them a wink- that way they know they need to step up their game.

2. Evil Kenevil did not do a backflip off of that rock in the 70’s.
Needless to say, after a few months of doing the same stretch of river day in and day out in the blazing sun, your raft guide’s imagination starts to run wild. He may start to look at each rock and tree with intense scrutiny, imagining what they most closely resemble, or what stunt a famous daredevil could possibly do off of them. After they have this ‘too much sun on the brain’ inspired vision, they may try to convince others it actually happened, and see who bites. Just remember the old raft guide proverb: ‘How do you tell your raft guide is lying? His lips are moving.’

3. There are no such things as right and left handed paddles.
They may even throw in an ‘the left are blue and yellow, and the right are yellow and blue’, just to see who can find the pattern and begin to help all the confused people around them.

Reality is, they are all exactly the same- except of course for the yellow and green ones for color blind people. 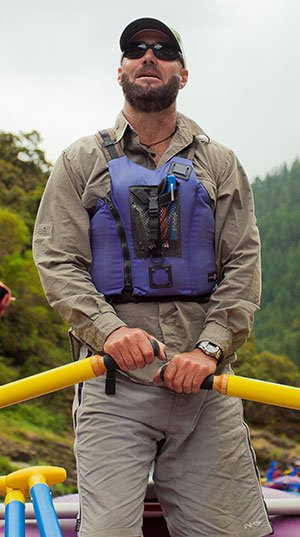 4. That guide was not Paddler of the Year for Paddle Magazine last year, nor was the other guide the model for the Coppertone Sunscreen when she was a kid.
This one is not necessarily to pull a fast one on you, but instead to put the ‘famous river guide’ in the hot seat. Just to see how clever they really are when under pressure. Chances are they were not told of their famous past before it was loudly repeated in front of them, and it is their job to make it seem very true. They blow it and give the secret away? They clean the portable toilet every night for the whole trip. Note: This one doesn’t work on the rivers near Los Angeles – they’ve all been in commercials themselves and don’t understand why THEY didn’t get a lifetime supply of Neutrogena when they were in the commercial.

5. The fabled ‘Pig Bear’.
Now this is one I really shouldn’t be telling you. I’m a bit afraid of the backlash from the guiding community on this one, but I believe you have a right to know, so here goes: There is no such thing as a Pig Bear. “Pig Bear?” You ask. “I’m really supposed to believe in an animal named Pig Bear?” Well, there really is such an animal as the ‘Dumbo Octopus’ and the ‘Pink Fairy Armadillo’ so is it really so far fetched to believe in such a thing as a Pig Bear? Your guide doesn’t think so, and being so well-versed in the art of creative storytelling, he MAY attempt to tell you all about it. He may even go as far as to dress up in a garbage bag in the dark of night and stomp around in the bushes making grunting noises. He may even insist you give him all your candy and toothpaste because the Pig Bear ‘has a sweet tooth during mating season’.  Don’t fall for it folks. In fact I have a way to flush out the truth… Jump up with your camp knife when the Pig Bear appears, give a good primal scream, and run at the ‘Pig Bear’ yelling ‘Time to catch us some breakfast!’. That ought to turn the Pig Bear right back into a human again.

So there you have it. I think there is one clear moral of the story- your river guide is a creative, charming, and genius individual who likes to ‘get creative with reality’ for the sake of entertainment. So my recommendation? Beat him at his own game. There’s no law that says you can’t give him a big hug at the end of the trip with a ‘highly contagious rash’ right?